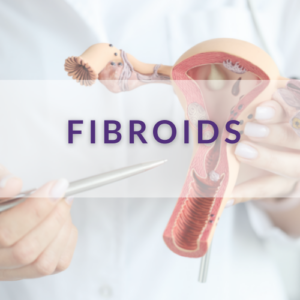 Fibroids are growths of the uterus. They arise from the muscle of the uterus and are sometimes called leiomyomas or myomas. They can cause the uterus to become larger, bulkier and irregularly shaped. Fibroids are not cancerous nor do they become cancerous. However, sometimes it is difficult to tell if a mass in the uterus is a fibroid or a rare form of cancer called uterine sarcoma.

Fibroids are very common. It is estimated that 80% of women will have fibroids in their lifetime, although not everyone will be symptomatic. Symptoms of fibroids include heavy or prolonged menstrual bleeding, pelvic pain or pressure or issues with pregnancy and infertility. Symptoms often depend on the size and location of the fibroids.

Large fibroids can sometimes be felt on physical examination, however pelvic ultrasounds are often used to confirm the presences and location of a fibroid. Fibroids do not need to be treated unless they are causing bothersome symptoms. Treatment options include medication or surgery.

If you have fibroids and have bothersome symptoms, talk with your provider about which treatment option would be best for you.

This website uses cookies so that we can provide you with the best user experience possible. Cookie information is stored in your browser and performs functions such as recognising you when you return to our website and helping our team to understand which sections of the website you find most interesting and useful.

Strictly Necessary Cookie should be enabled at all times so that we can save your preferences for cookie settings.

If you disable this cookie, we will not be able to save your preferences. This means that every time you visit this website you will need to enable or disable cookies again.