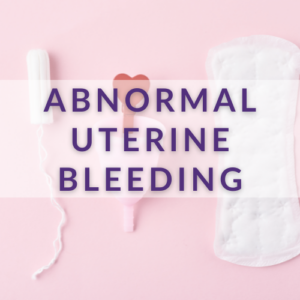 You can have abnormalities in frequency. You can be bleeding too often (i.e. having a period less than 24 days apart) or too infrequent (i.e. having a period more than 38 days apart). You can have amenorrhea, which is when you do not get a period at all. Primary amenorrhea describes a condition where a woman never gets a period after the time she was supposed to start puberty. Secondary amenorrhea describes a condition where a woman was previously having a regular period for at least six months but then stops. Some women may also experience intermenstrual bleeding (i.e. bleeding in between periods).

You can have abnormalities in quantity. You can be bleeding too heavy (i.e. bleeding more than 1 pad an hour for a minimum of 2 hours straight). Heavy menstrual bleeding may lead to other issues such as anemia. You can also have very light bleeding (i.e. only spotting). Typically having a light period is not an issue unless it is an indication of cervical stenosis or scaring in the uterus.

This website uses cookies so that we can provide you with the best user experience possible. Cookie information is stored in your browser and performs functions such as recognising you when you return to our website and helping our team to understand which sections of the website you find most interesting and useful.

Strictly Necessary Cookie should be enabled at all times so that we can save your preferences for cookie settings.

If you disable this cookie, we will not be able to save your preferences. This means that every time you visit this website you will need to enable or disable cookies again.